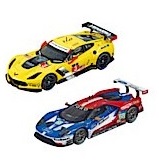 Over the course of 8 weeks, we will be racing on 8 different street circuits from Australia.

In this league, we will be racing Carrera Corvette C7-R and Ford GT race cars.

The allowed cars are as follows and will need a Digital Chip or be Digital Equipped before the race:

This cars can be in any available livery and you are allowed to have a total of 3 in your racing stable for the duration of the league as back-up cars in case of accidents or brake-downs.

(You will need a minimum of one car to race each night though.)

The race schedule is as follows :

Race points per driver per "Heat” will be awarded using the 1965 Formula 1 race points system as follows :

Race standings will be posted on a white board in the store.

The standard $10.00 entry fee and the Monster Hobbies Track Buck system will continue as usual with The League Champion winning a special award at the end of the League.

Good luck to everyone and may the best driver win!

Back to News Index

The United States Navy's SEa, Air and Land Teams, commonly known as the Navy SEALs, are the U.S. Navy's primary special operations force and a component of the Naval Special Warfare Command. Among the SEALs' main function is to conduct small-unit maritime military operations that originate from, and return to, a river, ocean, swamp, delta, or coastline. The SEALs are trained to operate in all environments (Sea, Air, and Land) for which they are named.

For over a Century, Tarzan has entertained audiences with hit powerful presence. Inspired by the art of Joe Jusko, Pegasus Hobbies is proud to bring you one of the greatest American icons.

Tarzan(John Clayton,Viscount Greystoke) is a fictional character, an archetypal feral child raised in the African jungles by the Mangani great apes; he later experiences civilization only to largely reject it and return to the wild as a heroic adventurer. Created by Edgar Rice Burroughs, Tarzan first appeared in the novel Tarzan of the Apes(magazine publication 1912, book publication 1914), and subsequently in twenty-five sequels, several authorized books by other authors, and innumerable works in other media, both authorized and unauthorized.
$49.00 Details

Custom cruiser from the cartoon king!

Designed by the dashing Dave Deal, drawer of "Deals Wheels", this devastating drag demon demands only the most daring drivers. The box art and kit design were both developed by Dave Deal who has been an avid racer, driver and restorer of classic cars as well as an artist for many years. With just a little effort you can build this custom contraption and display it proudly at home or in the office. This kit features a "far out" model with massive tires and a radically sculpted driver figure.